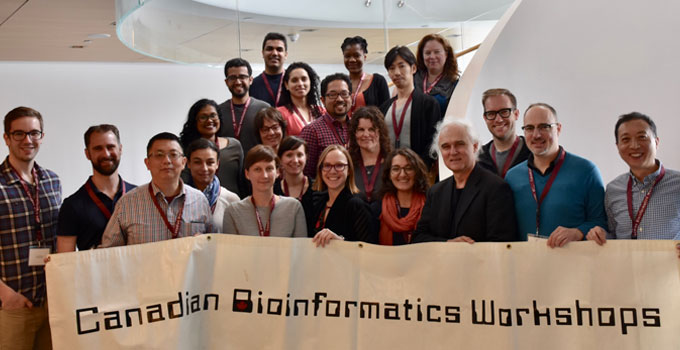 Researchers, specifically those studying cancer, require expertise to tackle increasingly complex, large datasets that are generated by rapidly developing sequencing technologies. Bioinformatics.ca has launched their 2018 Canadian Bioinformatics Workshops (CBW) series to train Canadian and international scientists on cutting-edge topics in bioinformatics – preparing them to harness the potential of big data.

“There is a large gap between the skills researchers have and the skills they need to take advantage of new technologies that are generating massive amounts of data,” says Dr. Ann Meyer, Knowledge and Research Exchange Manager at OICR. “The CBW series provides researchers with the training they need to effectively use their complex data sets for innovative research.”

On May 14, bioinformatics.ca kicked off the 2018 CBW series with an introductory workshop on R – the open source scripting language that is commonly used by experimental and computational biologists worldwide. This year, CBW’s 10 workshops cover the application of informatics to many areas of interest to up-and-coming bioinformaticians, including working with RNA, DNA, metagenomic, metabolomic and epigenomic data. The workshops also offer trainees the opportunity to network with a broad spectrum of researchers at different stages of their careers.

“Our workshops are hosted by leading researchers who come to train the next generation of bioinformaticians and computational biologists,” Meyer says. “Each year, we’re pleased to see both returning trainees and new trainees working to improve their skills.”

CBW has expanded across the country in response to the growing interest in building Canada’s research capacity in the life sciences. Workshops are hosted in Vancouver, Montreal and Toronto in addition to an annual flagship workshop in cancer genomics at the Cold Spring Harbor Laboratory in New York.

The CBW series has been supported by OICR, CIHR, the Canadian Centre for Computational Genomics, Compute Canada, HPC4Health, the Metabolomics society, Amazon Web Services, Canadian Epigenetics, and the Environment and Health Research Consortium Network. As part of their commitment to Open Access and Open Education, their past lecture and lab tutorial content is posted online at bioinformaticsdotca.github.io.

For more information on the current workshop series and to join the CBW mailing list, please visit bioinformatics.ca.