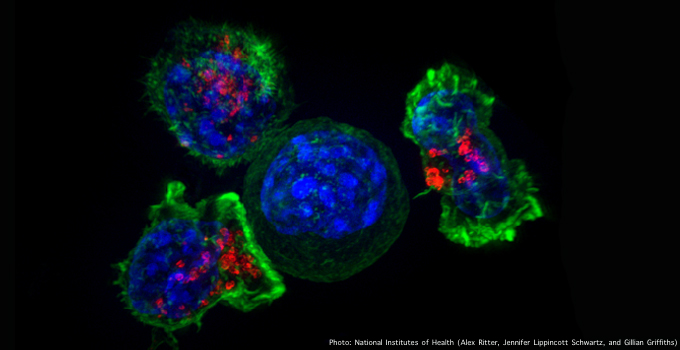 Researchers studying ovarian cancer identify adapter protein 3BP2 as a key component of immune system function and a powerful tool that could be used to activate the immune system against hidden tumour cells.

A variety of disease-causing threats – or pathogens – can be recognized, attacked and killed by the human immune system, but cancer cells often go undetected. Despite the recent progress in immuno-oncology, how immune cells sense, remember and respond to pathogens remains largely unknown. A better understanding of how immune responses are regulated could lead to new therapeutic strategies for hard-to-treat cancers.

Dr. Ioannis Dimitriou, Research Associate in the Rottapel Lab at the Princess Margaret Cancer Centre, is working to better understand immune responses at a molecular level. Under the leadership of Dimitriou, a research group has recently discovered that the protein 3BP2 plays a critical role in how our immune system recognizes and responds to a threat. Their findings are described in Cell Reports and funded, in part, by OICR through OICR’s Ovarian Cancer Translational Research Initiative (TRI).

“One of the biggest challenges in treating cancer, especially ovarian cancer, is that the cancer cells can evade the immune system,” says Dimitriou. 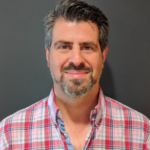 “If we can develop strategies to enhance the immune system, like modulating 3BP2’s function, we could enable it to better recognize and more efficiently kill those cancer cells – eliminating the tumour.”

Dimitriou’s study found two key functions of 3BP2 in CD8 T cells – the cells of the immune system that are responsible for killing tumour cells and virus-infected cells.

First, they found that 3BP2 lowers the threshold of activation needed to trigger a CD8 T cell response against a pathogen. This means that changing 3BP2 levels could make T cells more sensitive to tumour cells and potentially heighten their tumour-killing abilities.

Second, they found that 3BP2 plays a critical role in how CD8 T cells differentiate into memory cells that can remember and recognize pathogens – an important function that could be harnessed to better recognize tumour cells that are disguised as healthy cells.

“These findings show that 3BP2 is not only important to regular immune system function, but it could also be modified to enhance the immune response against diseases like ovarian cancer, a disease that is notoriously immune-tolerant,” says Dimitriou.

The Rottapel Lab has discovered that 3BP2 can be regulated by drugs and that the manipulation of 3BP2 pathways can unleash the body’s innate defense mechanisms. The research group will continue investigating how 3BP2 is regulated in cells and will work with OICR’s Drug Discovery team to find and test molecules that can modify its function.

“This discovery sheds new light on immune function and regulation,” says Dr. Rob Rottapel, Senior Scientist at the Princess Margaret Cancer Centre, leader of OICR’s Ovarian Cancer TRI and senior author of the publication. “We look forward to finding a way to re-activate an immune response against cancerous cells to find new immunotherapeutic strategies for patients with ovarian cancer.”