News and Media
Dr. John Dick elected as 2016 Fellow of the AACR Academy
Toronto (April 6, 2016) – Dr. Tom Hudson, President and Scientific Director of the Ontario Institute for Cancer Research (OICR) today congratulated Dr. John Dick on receiving the prestigious honour of being one of 11 newly elected Fellows to the AACR (American Association for Cancer Research) Academy.

Toronto (April 6, 2016) – Dr. Tom Hudson, President and Scientific Director of the Ontario Institute for Cancer Research (OICR) today congratulated Dr. John Dick on receiving the prestigious honour of being one of 11 newly elected Fellows to the AACR (American Association for Cancer Research) Academy.

Dr. Dick is a Canada Research Chair in Stem Cell Biology and Senior Scientist at the University Health Network’s Princess Margaret Cancer Centre and McEwen Centre for Regenerative Medicine and Director of the Cancer Stem Cell Program at OICR. 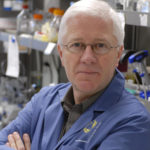 “Dr. Dick’s contributions to the field of cancer research are vast and have had a major impact on our understanding of cancer,” said Dr. Hudson. “OICR is proud to work with Dr. Dick in the Cancer Stem Cell Program and, on behalf of the entire Institute, I offer my sincere congratulations to him for this prestigious honour.”

“Ontario is where stem cells were first discovered, by Drs. James Till and Ernest McCulloch,” said Reza Moridi, Minister of Research and Innovation. “Dr. Dick continues this proud tradition with his world-leading research on cancer stem cells. I congratulate him on this honour and thank him for his contributions to cancer research.”

Dr. Dick is internationally recognized as the first person to identify cancer stem cells in certain types of leukemia. His “cancer stem cell hypothesis” spawned a new direction in cancer research because it showed that not all cancer cells are the same.

The AACR Academy recognizes and honours distinguished scientists whose major contributions have propelled significant innovation and progress against cancer. The AACR only recognizes individuals whose work is considered to have had a significant and long-lasting impact on the field of cancer research. The AACR uses a rigorous peer review process conducted by existing Fellows of the Academy to nominate and elect new Fellows.

Eleven individuals are chosen annually to join the AACR Academy. Once inducted, they join previous members of the Academy to provide expert insight and guidance to the AACR in its mission to prevent and cure all cancers.

Dr. Dick will be formally inducted into the 2016 class of Fellows at the 2016 AACR Annual Meeting in New Orleans later this month.