To unlock a new class of cancer-killing drugs, OICR researchers are looking for keys among a previously overlooked family of proteins.

WD-repeat proteins play an important part in many cellular processes by acting as ‘scaffolding’ proteins and thus bring different proteins together.

This family of more than 300 proteins was traditionally seen as difficult to drug. Most drug discovery efforts focus instead on other targets such as enzymes that play a driving role in many cellular functions.

But an OICR collaboration with the Structural Genomics Consortium (SGC) has found there is more to these unassuming proteins than initially thought, and that inhibiting them with small molecules could play an important role in slowing down cancer.

“We’re learning that targeting the protein-protein interactions regulated by WD-repeat proteins causes consequences that could be clinically relevant to cancer,” says Mahmoud Noureldin, a fourth-year PhD student at the University of Toronto based in OICR’s Drug Discovery team.

Working closely with the Drug Discovery biology team led by Dr. Richard Marcellus, Noureldin’s work focuses on DCAF1, one of several WD-repeat proteins identified by the group as potential targets for cancer drugs. DCAF1 is part of a system that regulates the levels of other proteins in a cell, and Noureldin has been exploring how it acts on lung cancer cells.

After analyzing data generated by the Broad Institute about the potential anti-cancer effects of inhibiting the DCAF1 protein, he conducted experiments using artificial RNA to ‘knock down’ DCAF1 protein in six different cell lines to see how lung cancer cells respond.

This was an exciting discovery, but it’s important to understand why it happens. So Noureldin is now investigating the biology behind this outcome by looking at the changes it causes in RNA and other molecular structures.

Meanwhile, work is well underway on the tools to action this important discovery. In collaboration with an AI company, colleagues at the SGC have identified a small molecule inhibitor for DCAF1 that is now being improved upon by the OICR Drug Discovery chemistry group. The generation of a ‘chemical probe’ is one of the key steps toward developing a clinically useful therapeutic, and OICR researchers are working with the SGC team, led by Dr. Cheryl Arrowsmith, to achieve that goal.

Though more research and development are needed to know if this project will lead to a new cancer treatment, it’s another promising development in OICR’s exploration of these novel targets.

“We are looking at multiple WD-repeat targets related to multiple disease areas, and we are making good progress,” says Dr. Rima Al-awar, Head of Therapeutic Innovation and Drug Discovery at OICR.

This work is the result of a longtime collaboration with SGC that harnesses both partners’ strengths: SGC’s expertise in protein production, biophysical assays and crystallography and OICR’s expertise in medicinal chemistry, target validation and assay development. This has already yielded exciting advanced leads, including a compound targeting the WDR5 protein that showed potential against leukemia and attracted major industry investment.

The knowledge and tools OICR and SGC are developing around WD-repeat proteins will be contributed to the EUbOPEN, an international open science initiative aimed at accelerating the often complex and expensive drug discovery process.

“We are developing chemical probes targeting proteins like DCAF1 and putting them out into the public domain so that they can be validated further,” Al-awar says. “Hopefully this can help advance new treatments that can make a difference to cancer patients.”

As the work progresses, OICR is also strengthening its capacity to study these proteins and advance new therapeutics. This includes bringing Dr. Masoud Vedadi on board from the SGC, a world-renowned expert in working with novel proteins and one of the key scientists behind the WDR5 project.

“It has been a great experience collaborating with OICR on various successful projects over the past several years, and it is a great pleasure to join the OICR team. I am confident the team will continue to be a world leader in discovery of chemical probes for the WDR family of proteins and other cancer drug targets,” said Vedadi, who joined OICR as Senior Scientific Advisor in July this year.

Al-awar says that adding Vedadi helps OICR build on its existing expertise that includes teams of experts in medicinal, analytical, computational chemistry and biology and leveraging our successful collaborations with SGC and others.

For a PhD student like Noureldin, the DCAF1 project has provided a window into the multidisciplinary drug discovery process.

“This is a unique environment and such a collaborative process, and I’m privileged to be part of it,” he says. “Obviously our hope is that a DCAF1 inhibitor can someday help people with lung cancer. It’s too early to say, but it’s exciting to be working towards that goal.” 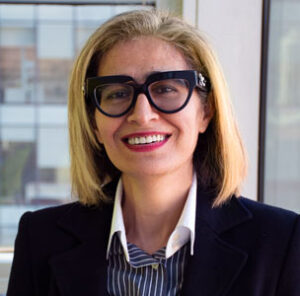 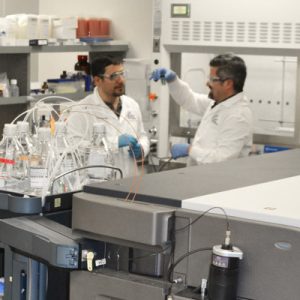