News and Media
Expanding the DNA alphabet to understand cancer
The base components of DNA – adenine, thymine, cytosine and guanine (commonly referred to as ATCG) are so fundamental to the study of genetics that they are probably familiar to anyone who has taken a high school biology class. Now, one team of researchers has expanded the ‘DNA alphabet’ to help aid in efforts to learn how cancers develop. 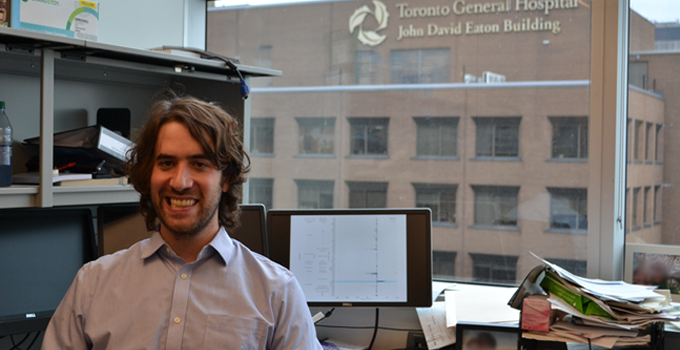 The base components of DNA – adenine, thymine, cytosine and guanine (commonly referred to as ATCG) are so fundamental to the study of genetics that they are probably familiar to anyone who has taken a high school biology class. Now, one team of researchers has expanded the ‘DNA alphabet’ to help aid in efforts to learn how cancers develop.

Dr. Michael Hoffman, Principal Investigator at Princess Margaret Cancer Centre and a member of OICR’s Cancer Stem Cell Program, is focussed on trying to understand how gene regulation works using large genomic datasets. The models developed by Hoffman and his colleagues show how cells know which genes to turn on and off in different conditions.

In their work with the Cancer Stem Cell Program, Hoffman and his lab are working to develop improved models to see how a process called DNA methylation affects gene regulation. DNA methylation is a modification of DNA where a methyl chemical group is added to cytosine. This sort of reversible change to the chemical structure of DNA is called an epigenetic change. Epigenetic changes can be caused by environmental factors or disease and can also occur during the ordinary development of organisms. DNA methylation can affect the function of genes by altering expression of their RNA and proteins in the cells. Methylation is important in certain types of cancer, especially acute myeloid leukemia (AML) and glioblastoma, which are of interest to the Program.

“Our models are looking at how a group of proteins called transcription factors, which bind specific sequences of DNA, identify where DNA is methylated and how that methylation affects the transcription factors and ultimately gene expression,” explains Hoffman. “Learning how methylation goes awry will ultimately help us better understand the overall biology of these cancers.”

Hoffman’s methods use what he calls the expanded epigenetic alphabet to expand beyond the use of the regular ATCG, by adding letters such as m and h, to directly incorporate methylation into models of transcription factors in the regulatory regions of the genome.

Hoffman brings a unique set of expertise to the Program and he gets much in return. “As a early career scientist it is great to be a part of this program and I am really happy it exists here. It allows me to interact and exchange ideas with researchers not just here in Toronto but also elsewhere in Ontario, like McMaster,“ says Hoffman. “At our monthly faculty meetings we get a level of expert feedback that you don’t get elsewhere. We also get to see some advanced research before others. These things help me shape my scientific program so that it can be its most useful in understanding how cancer stem cells work.”