News and Media
FACIT invests in new CPDC spin-out company to aid development of potent radiotherapeutic
In December, the Fight Against Cancer Innovation Trust invested in Fusion Pharmaceuticals to assist in the development of FPX-01, a potent new alpha-emitting radiotherapeutic being developed in Hamilton, Ontario. Early testing has shown a great deal of promise: the drug has the cancer-cell killing power of existing, similar treatments, but balances this strength with far more precision, meaning fewer side effects for patients. Early results from a Phase I clinical trial have shown effectiveness in patients with solid tumours. FACIT’s investment will support the efforts to advance FPX-01 into Phase I/II clinical trials. 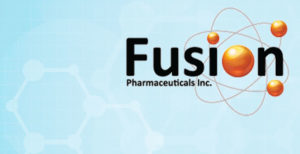 In December, the Fight Against Cancer Innovation Trust invested in Fusion Pharmaceuticals to assist in the development of FPX-01, a potent new alpha-emitting radiotherapeutic being developed in Hamilton, Ontario. Early testing has shown a great deal of promise: the drug has the cancer-cell killing power of existing, similar treatments, but balances this strength with far more precision, meaning fewer side effects for patients. Early results from a Phase I clinical trial have shown effectiveness in patients with solid tumours. FACIT’s investment will support the efforts to advance FPX-01 into Phase I/II clinical trials.

Fusion Pharmaceuticals is a spin-out of the Centre for Probe Development and Commercialization (CPDC) at McMaster University. CPDC has received funding support from OICR since 2008.

We spoke with Michael Cross, General Manager for CPDC Radiopharmaceuticals and one of the key players in setting up Fusion as a spin-off company, about the potential of the new therapy and what makes Fusion’s approach unique.

Can you please explain how FPX-01 works?

FPX-01 is based on a radiolabelled human antibody directed against the cancer cell surface receptor target IGF-1R. For therapeutic effect, the antibody is linked to the high energy, alpha particle emitting isotope, actinium-225 (225Ac). When FPX-01 binds to its IGF-1R target it immediately internalizes and accumulates and the alpha particles then produce double stranded breaks in the DNA. This results in the cell’s death.

An important aspect of Fusion’s approach is that images of the cancerous lesion or the effects of FPX-01 on the cell can be obtained through the use of a SPECT or PET scan simply by substituting an imaging isotope, such as Indium-111 or Gallium-68, in place of the therapeutic isotope 225Ac.

What advantages does FPX-01 have over other similar therapies, as well as other forms of cancer treatment?

FPX-01 is unique compared to other cancer therapies because it combines the targeting specificity of a human antibody with the potent cell-killing power of 225Ac. This combination provides specificity so that there is minimal impact to non-targeted tissues by FPX-01, thereby reducing side effects of the drug for patients. The very short length of radiation transmission associated with actinium-225 also means that its effects are only seen within the target cell and not in nearby normal tissues. This is in contrast to beta emitting isotope drugs where the radiation travels significantly farther thereby increasing the possibility of off-target effects. In addition, the resulting double stranded DNA breaks in the cancer cell are also not responsive to the normal DNA repair mechanisms that commonly result in drug resistance. Thus, FPX-01 advantages are based on its target precision, local effects and the inability of the cancer cell to repair itself.

FPX-01 is currently in a Phase I trial. Can you tell me a little about that and how it is going?

Fusion initiated a proof of concept Phase I imaging trial in 2014 at three leading academic research centres in Hamilton and Toronto. The trial established the initial safety and biodistribution of FPX-01, as well as its ability to identify and deliver an imaging payload to cancerous lesions that expressed the cell surface target, IGF-1R. In one patient, the study led to the identification of metastatic disease that had not previously been detected with standard imaging methods. No serious adverse events were reported as a result of the use of FPX-01. These data will be utilized with additional preclinical studies to advance FPX-01 into a Phase I/II therapeutic efficacy study with 225Ac in the US and Canada beginning in 2017.

How will the support of FACIT help Fusion move FPX-01 through its development?

The support from FACIT has allowed Fusion to move forward with both drug development and corporate activities that ultimately advanced the company to the point where investors have taken a very keen interest in leading a substantial Series A financing. By leveraging the seed funding from FACIT to further develop FPX-01, Fusion was in a much stronger position to command a higher valuation for its stakeholders while also having the resources to further its negotiations to in-license the IGF-1R antibody construct from a major pharmaceutical company, and provide additional leverage to ensure the amount of funds raised will be sufficient to see the advancement of FPX-01 through Phase I/II clinical development.