News and Media
For Dr. Jüri Reimand, data tells a story
There are many ways to tell a story, but Dr. Jüri Reimand likes to tell stories in a different way – with data. Reimand, a new OICR Investigator in the Informatics and Bio-computing Program, is a computer scientist by training who developed a keen interest in human biology and disease. 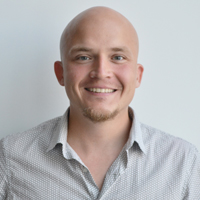 There are many ways to tell a story, but Dr. Jüri Reimand likes to tell stories in a different way – with data. Reimand, a new OICR Investigator in the Informatics and Bio-computing Program, is a computer scientist by training who developed a keen interest in human biology and disease.

While growing up in Estonia, Reimand always had an interest in computers and understanding how they work. This led him to the University of Tartu to pursue a degree in computer science. When nearing the end of his undergraduate studies Reimand was looking for a thesis topic when he happened to meet a “young, kind of cool professor” who was working to set up a bioinformatics program from scratch. Reimand joined his team and worked to interpret large-scale data and gene lists.

“Pure computer science can be dry sometimes, but I saw that informatics could be used for many interesting applications in life sciences and medicine,” says Reimand. “As time went on I have become more of a biologist.”

Reimand completed his Master’s degree and PhD at the University of Tartu and also studied in Austria and England. One of his main areas of research interest involved gene regulatory networks in yeasts. “Yeasts are fundamentally interesting and important model organisms to understand basic biology, but not necessarily human disease,” says Reimand. “That’s why I came to Toronto to do my postdoctoral training and study human disease and cancer.” In 2010 he came to the University of Toronto’s Donnelly Centre for Cellular and Biomolecular Research to train at the computational network biology lab of Dr. Gary Bader.

Now that he has joined OICR as an Investigator, Reimand is working to establish his lab and recently hired his first bioinformatician and expects to add an experimental postdoc soon.

“My main focus can be broadly defined as pathway and network analysis,” says Reimand, “but that really means different types of analysis on large amounts of data generated by technologies such as next generation sequencing, incorporating existing knowledge about networks and pathways to interpret signals in the data and propose hypotheses (‘stories’) about underlying biology and disease mechanisms.”

Reimand’s goal is to make the stories that he tells with data so effective that they spur others to follow up on his research and do things like create mouse models or test a compound against a cancer cell line. “The synthesis of knowledge from decades of previous research allows us to focus on a slice of data that tells the best story about the underlying biology,” says Reimand. “For example, we can better understand the mutations driving cancer by applying some of our knowledge of the genome and seeing if it adds up as valid hypothesis. We can then tell a story about how these mutations may lead to cancer development or resistance to therapy.”

Telling these data stories is not without challenges. “Data are noisy. You need to be careful when building these stories to distinguish the real signal from the noise. You need to be sure that the evidence that you find, for example an accumulation of cancer mutations in a hotspot in a genome, is not there by random chance,” says Reimand. “This is why I am so interested in pursuing interdisciplinary approaches in my lab’s work.” Reimand says that he envisions having people in his lab who are knowledgeable in statistics and algorithms and also understand how cancer, biology and biochemistry work.

Although Reimand is still in the process of establishing his lab at OICR he has continued his work from the Donnelly Centre, identifying mutations that are responsible for driving cancer within the Pan-Cancer project of the International Cancer Genome Consortium. He has also recently started a collaboration with the Transformative Pathology Program at OICR to find biomarkers that are predictive of breast cancer risk and progression.

“Being a PI is a new exciting challenge as one is not taught to build teams as a postdoc. I strive to create an environment that will empower my lab members to design and complete research projects on their own,” says Reimand. “I would be happy to see my group establish a niche and help expand OICR’s bioinformatics capacity.”