News and Media
OICR partners with Israeli university to create new cancer genomics and immunity program
On May 18 an Ontario delegation led by Premier Kathleen Wynne visited Israel and signed several Memoranda of Understanding aimed at facilitating collaboration between Israeli and Ontario institutions. 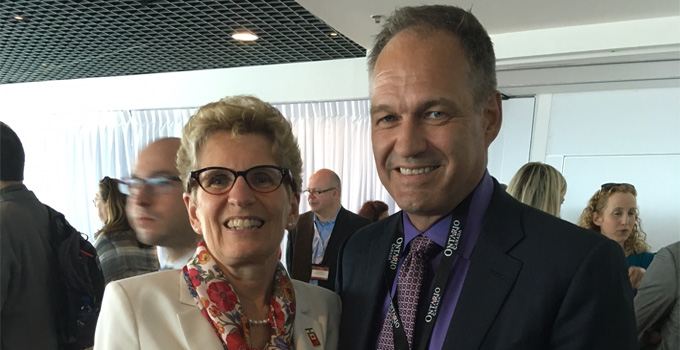 On May 18 an Ontario delegation led by Premier Kathleen Wynne visited Israel and signed several Memoranda of Understanding aimed at facilitating collaboration between Israeli and Ontario institutions.

OICR participated in the Ontario delegation and signed a Memorandum of Understanding valued at $5 million with the Hebrew University of Jerusalem to create the Joseph and Wolf Lebovic Cancer Genomics and Immunity Research Program. The program will support tumour immunology and genomics postdoctoral researchers and students, helping them to make cancer therapies more effective. The ultimate goal of the partnership is to create a collaborative environment that will accelerate the pace of cancer research, allowing for new advances that would not be possible with each institution working alone.

Ontario and Israel have been collaborating on projects that advance discovery, leading to new breakthrough treatments, cures and technologies

In a statement, Ontario’s Minister of Research and Innovation, Reza Moridi said: “For many years, researchers from Ontario and Israel have been collaborating on projects that advance discovery, leading to new breakthrough treatments, cures and technologies that offer the potential to improve lives locally and globally. The agreements announced today build on that legacy of results-based partnerships and illustrate the ever-deepening innovation, economic and cultural connections between Ontario and Israel.”