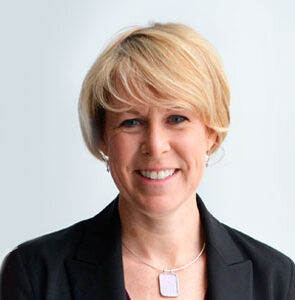 Dr. Christine Williams serves as the Deputy Director of OICR.

After completing her PhD in Immunology at the University of Toronto, Dr. Williams pursued postdoctoral training at the Massachusetts General Hospital and Harvard University where she studied the molecular pathways involved in the development of leukemia and lymphoma in children.

As OICR’s Deputy Director, Dr. Williams works with OICR’s executive team and scientific leaders to evaluate, develop and lead strategic initiatives across the Institute’s priority areas. She acts as a liaison between OICR researchers and management while developing and maintaining productive relationships with a broad range of provincial, national and international stakeholders including academic, industry and government partners.

Dr. Williams has served on several boards and advisory committees, including as the former chair of the Canadian Cancer Research Alliance.

This website uses cookies to improve your experience while you navigate through the website. Out of these, the cookies that are categorized as necessary are stored on your browser as they are essential for the working of basic functionalities of the website. We also use third-party cookies that help us analyze and understand how you use this website. These cookies will be stored in your browser only with your consent. You also have the option to opt-out of these cookies. But opting out of some of these cookies may affect your browsing experience.
Necessary Always Enabled

Performance cookies are used to understand and analyze the key performance indexes of the website which helps in delivering a better user experience for the visitors.

Analytical cookies are used to understand how visitors interact with the website. These cookies help provide information on metrics the number of visitors, bounce rate, traffic source, etc.

Advertisement cookies are used to provide visitors with relevant ads and marketing campaigns. These cookies track visitors across websites and collect information to provide customized ads.

Other uncategorized cookies are those that are being analyzed and have not been classified into a category as yet.