News and Media
New prognostic test for prostate cancer now closer to clinical use
Prostate cancer is the most common cancer in Canadian men, but there is still no one-size-fits-all strategy for treating the disease. Currently it is difficult to choose exactly the right type and amount of treatment for each individual because it is hard to accurately assess how aggressive the cancer is. Researchers are now a step closer to bringing a powerful new prognostic tool into clinical use. 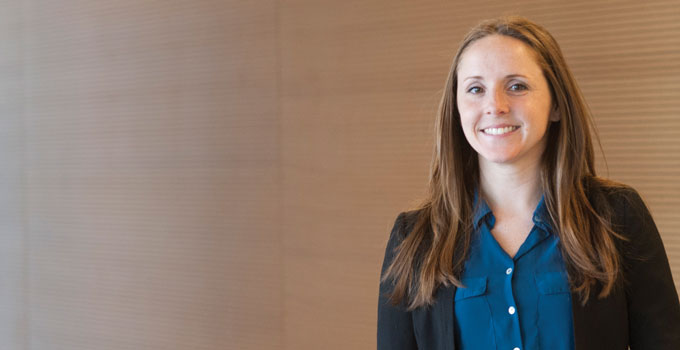 Prostate cancer is the most common cancer in Canadian men, but there is still no one-size-fits-all strategy for treating the disease. Currently it is difficult to choose exactly the right type and amount of treatment for each individual because it is hard to accurately assess how aggressive the cancer is. Researchers are now a step closer to bringing a powerful new prognostic tool into clinical use.

Dr. Emilie Lalonde, a Clinical Molecular Genetics fellow at the University of Pennsylvania, and formerly a PhD Student at OICR under the supervision of Dr. Paul Boutros, spoke to OICR News about the development of the test and the latest step towards seeing it used in cancer centres. The research is part of the Canadian Prostate Cancer Genome Network (CPC-GENE), which is funded by Prostate Cancer Canada and OICR.

Can you explain why this new test is needed?

Currently men with prostate cancer at intermediate risk of recurrence (men who fall between having a high or low risk of the disease returning after initial treatment) have their prostate treated either by radiation therapy or by surgery. This works well for most patients, but a significant proportion of these men could survive for many years without any symptoms at all, and another group of men will quickly have disease progression. Our tests try to identify these subsets of patients so that their treatment strategy can be modified accordingly.

How was the test developed and how does it work?

This test is actually a modification of an existing test we developed between 2012 and 2014. The main strategy was to look at copy number alterations (CNAs) across the genome of patients who had been treated more than five years ago. This allowed us to relate the CNAs to the patient’s known clinical outcome. Using a computerized method called machine learning, we created a model that could predict patients at risk of recurrence; the idea would be to use this test on the pre-treatment biopsy of a patient to guide treatment decisions.

The original test included 100 regions, or 276 genes, which is pretty big for a molecular test. This study reduced the number of regions in the test to 31 without compromising the predictive ability. As a result, the test is now more affordable making clinical applications more feasible.

What is the purpose of the validation study and how was it carried out?

There were two goals for this study. First, as I already mentioned, was to reduce the size of the molecular test to a size more appropriate for the clinic. Secondly, we validated the test in three new patient cohorts and showed that it could also predict which patients would develop metastasis. In total, the test has now been validated in 563 patients from five different centers from four countries.

What is the next step now that the validation study has been completed?

We have validated the test in a prospective manner (looking back at patients diagnosed years ago), but we have not yet validated the test in a prospective cohort. This requires applying the test to pre-treatment biopsies of new patients, and using that information to inform the intensity of their treatment. After three to five years, we could then assess whether using the test resulted in improved disease management compared to the standard approach.

Are there any advantages to this technology that will make its translation into the clinic easier?

Whereas the test was measured with genome-wide microarrays for four out of five cohorts, we used the NanoString technology for our own CPC-GENE validation cohort of 102 patients. This platform measures only the 31 loci of interest which helps reduce cost, analysis time and complexity of the test. Since NanoString is also an FDA-approved technology, the development of this targeted assay will further enable clinical translation of our molecular test.