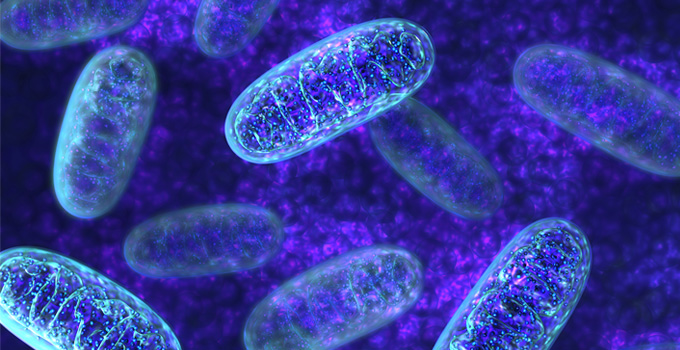 Since mitochondria are inherited maternally, it may strike some as an odd place to go looking for connections to prostate cancer. But recently an international research team explored that relationship by looking at how the small amount of DNA contained in mitochondria, a cellular structure, is involved in prostate cancer.

Dr. Julia Hopkins, a Postdoctoral Fellow in OICR’s Computational Biology Program who is supervised by Dr. Paul Boutros, led a study of the role of mutations in DNA contained in the mitochondria. “There hadn’t been any large-scale studies into the role of mitochondrial DNA in driving prostate cancer aggression,” explains Hopkins. “We studied the entire mutational profile of prostate cancer and not just those mutations found in nuclear DNA, and linked these to clinical information about tumour aggressivity.”

When we think of DNA, the most common image that comes to mind is the linear, double-helix structure found in the nucleus of our cells. However, mitochondria, a small structure in cells that converts the energy in food into the form used by cells to fuel the body, also contains its own form of genetic instructions called mtDNA.

mtDNA differs from DNA found in the cell nucleus in that it is circular in form and much smaller: there are only 37 mitochondrial genes – compared to more than 20,000 in the nucleus. Mitochondria play a central role in cellular functions that are altered in cancerous cells such as energy production, metabolism and apoptosis (the normal, programmed death of cells in an organism).

To study the role of mtDNA the researchers sequenced samples from 384 patients with localized prostate cancer. Computational data analysis uncovered mitochondrial mutations were more frequent in tumours that arise in older patients and in larger tumours. In addition, they discovered that some of these mutations occur in ‘mutational hotspots’ – small regions within the genome that are predictive of the risk of tumour recurrence after therapy.

The group’s research, published in Nature Communications, also showed strong links between mutations in mtDNA and nuclear DNA. “We found that when patients had a mutation in the non-coding region of their mitochondrial DNA, they often had a mutation in an oncogene called MYC, which often plays a role in driving cancer,” says Hopkins. “Our analysis showed that these mutations are jointly associated with patient survival, revealing this unexpected interplay between the two genomes of the human cell.”

The information gained in the study about mtDNA mutations, their interplay with nuclear DNA and the resulting impact on patient outcomes could be used to help clinicians predict patient survival and the chance of a biochemical recurrence of prostate cancer following treatment. The next step will be for the group to validate the ‘signature’ of mtDNA mutations so that it can be further developed into a clinical test.