News and Media
OICR congratulates J. Mark Lievonen and Laurence Klotz on their investiture in the Order of Canada
Mr. J. Mark Lievonen, a member of OICR’s Board of Directors, and Dr. Laurence Klotz, a doctor and researcher based at Sunnybrook Health Sciences Centre and the University of Toronto, who has conducted OICR-funded research into prostate cancer, were invested as Members in the Order of Canada at a ceremony in Ottawa on May 13.

Mr. J. Mark Lievonen, a member of OICR’s Board of Directors, and Dr. Laurence Klotz, a doctor and researcher based at Sunnybrook Health Sciences Centre and the University of Toronto, who has conducted OICR-funded research into prostate cancer, were invested as Members in the Order of Canada at a ceremony in Ottawa on May 13.

Below are the citations for Lievonen and Klotz from the Governor General that highlight the achievements that earned them a place in the Order. 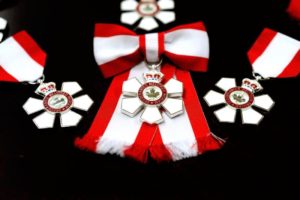 Insignia presented to those in the Order of Canada. (MCpl Vincent Carbonneau, Rideau Hall)

A leader in the pharmaceutical industry, Mark Lievonen is also a passionate contributor to public policy debates. He has led the expansion of Sanofi Pasteur Limited, positioning the company as a global biotechnology enterprise and a symbol of Canadian innovation. He has also been an advisor on health and drug access policy for the federal and provincial governments. In addition, he founded Sanofi Biogenius Canada, a student program that encourages aspiring scientists to pursue leading-edge research.

Laurence Klotz has expanded the treatment options for early-stage prostate cancer. He is a professor at the University of Toronto, the former chief of urology at Sunnybrook Health Sciences Centre, and the chair of the World Urologic Oncology Federation. Over the course of two decades, he challenged conventional practice and demonstrated that, in cases of low-risk prostate cancer, careful monitoring and only the most necessary of interventions save many men from unnecessary surgery and its related complications. This approach, known as active surveillance, has become a cornerstone of care in clinical centres around the world.

Governor General to Invest 48 Recipients into the Order of Canada