Ten new projects were selected in the pipeline’s inaugural funding round, highlighting Ontario’s strengths in collaboration and drug discovery.

Toronto (December 4, 2017) – The Ontario Institute for Cancer Research (OICR) today announced the Cancer Therapeutics Innovation Pipeline (CTIP) initiative and the first 10 projects selected in CTIP’s inaugural round of funding. CTIP aims to support the local translation of Ontario discoveries into therapies with the potential for improving the lives of cancer patients. The funding will create a new pipeline of promising drugs in development, and attract the partnerships and investment to the province necessary for further clinical development and testing.

“Ontario congratulates OICR on this innovative approach to driving the development of new cancer therapies,” says Reza Moridi, Ontario’s Minister of Research, Innovation and Science. “The Cancer Therapeutics Innovation Pipeline will help ensure that promising discoveries get the support they need to move from lab bench to commercialization, and get to patients faster.”

The 10 projects, selected from 49 applications across Ontario, were evaluated by an international panel of drug discovery and development experts, and target a wide range of cancers, including brain, liver and kidney cancers, as well as leukemia. 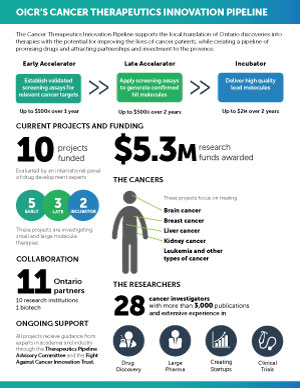 “The quality of the projects put forward demonstrates the depth of talent and innovation in Ontario’s biology and drug discovery sectors,” says Dr. Christine Williams, Deputy Director of OICR. “We were very pleased with the tremendous response to this initiative. We congratulate the outstanding scientists involved and look forward to working with them in advancing their innovations toward the clinic.”

Beyond financial support, CTIP projects will benefit from the guidance of the Therapeutics Pipeline Advisory Committee (TPAC), a group of experts from industry and academia. This group will provide the awardees with advice on the strategic direction of their projects and, together with OICR’s commercialization partner, the Fight Against Cancer Innovation Trust (FACIT), assess the readiness of the innovations for partnerships.

Several projects aim to treat brain cancer, including two targeting an aggressive form of paediatric brain cancer called diffuse intrinsic pontine glioma (DIPG), which is resistant to chemotherapy and currently has no effective treatment. One of those projects, led by Dr. Cynthia Hawkins at The Hospital for Sick Children (SickKids), will use the disease’s unique underlying biology to help uncover drugs to target and destroy DIPG cancer cells while leaving normal cells unharmed.

“CTIP funding will allow us to use high-throughput screening to find drugs that can target the unique biological features of diffuse intrinsic pontine glioma cells,” says Hawkins. “But beyond that, the support and expertise of those involved in CTIP will help us to work collaboratively to attract the partners needed to translate these discoveries into therapies that can help children diagnosed with this devastating disease.”

OICR will continue to seek out new projects for its CTIP portfolio through future funding rounds.

We are developing a novel therapy to treat breast cancer involving serotonin, which we have shown is required for tumour growth. Serotonin is commonly associated with the nervous system, where it is made in specific nerve cells in the brain and then released to engage receptors on the surface of other nerve cells. Our research is focused on determining whether one of the serotonin receptors, which we have implicated in breast cancer, is required for breast tumour cell survival, and if it eliminates the gene encoding the receptor from breast tumour cells. Additionally, we are determining whether chemicals that specifically block the receptor can be developed into drugs to treat this disease.

Diffuse Intrinsic Pontine Glioma (DIPG) is a devastating brain tumour arising in the brainstem of children. Despite current multimodal therapies, DIPG remains incurable with a median survival of less than one year, making it the leading cause of brain tumour-related death in children. We now understand that DIPG has mutations in histone genes, which is a unique underlying biology making it distinct from other brain tumours. It also suggests this may be a good way to target the cancer cells. With the resources provided by the Cancer Therapeutics Innovation Pipelines, we will utilize high throughput screening to uncover drugs that have targets showing synthetic lethality with the mutant histone, allowing us to develop new treatment strategies for this devastating disease.

Pontin and Reptin are two homologous and highly conserved ATPases. These ATPases have recently been implicated in carcinogenesis, especially in hepatocellular carcinoma, the most common type of liver cancer. In this project, high throughput activity assays will be used in a campaign to screen for inhibitors of Pontin and Reptin. The Houry group at the University of Toronto has biochemical and cell biology expertise working with Pontin and Reptin. This project could have important impact in developing new anticancer compounds against new protein targets.

The ability to harness the power of the immune system (known as immunotherapy) to treat cancer has emerged as a one of the most promising strategies to invoke long-term cures for patients with advanced disease. Unfortunately, these dramatic responses to therapy are limited to a small subset of patients, with the majority developing resistance. By utilizing state-of-the-art CRISPR gene-editing technology, our proposal seeks to identify genes that are responsible for directly mediating resistance to immunotherapy and subsequently leveraging this information to develop novel antibody-based drugs that can be used together with existing immunotherapies to circumvent resistance. Our ultimate goal is to develop the necessary preclinical data required to support the clinical testing of our novel therapeutic strategy.

Some of the lipids that make up the membranes of our cells have roles in determining whether our cells remain stable, grow or die. Some cancer cells have abnormal lipid profiles, and this contributes to their aggressive growth properties. This is particularly true of cancer cells that no longer respond to chemotherapy or radiotherapy. We will develop drugs that will selectively kill cancer cells by reducing the levels of growth-promoting signaling lipids. We expect that these drugs will be able to treat multiple cancers, including melanoma, prostate cancer and leukemia.

We aim to discover potent, selective and orally bioavailable small molecule inhibitors of a kinase which is involved in negatively regulating the proliferation of primary T-cells in response to T-cell receptor stimulation. We believe that inhibiting this kinase may amplify the anti-tumour activity of immune cells and could prove to be synergistic with current and future immunotherapies.

We aim to discover potent, selective, orally bioavailable small molecule inhibitors capable of crossing the blood-brain barrier to treat glioblastoma. The inhibitors will target a kinase involved in regulating pre-mRNA splicing and regulating cellular division. Genetic silencing of this kinase has been demonstrated to inhibit the proliferation and survival of a variety of cancers including diffuse large B-cell lymphoma, pancreatic, breast and colorectal cancer. Evidence coming from the lab of Dr. David Kaplan has also implicated this target in glioblastoma, a cancer for which new treatment options are desperately needed.

The mitochondrial protease, ClpP, rids mitochondria of excess and misfolded proteins. We showed that ClpP is over-expressed in a subgroup of acute myeloid leukemia (AML) patients. Inhibiting ClpP killed AML cells over normal cells in cell culture models and in mouse models of leukemia. In collaboration with the OICR Drug Discovery team, we are developing small molecule ClpP inhibitors as leads for potential new therapies for this hard-to-treat blood cancer.

M4K Pharma, OICR and a range of collaborators from around the world are launching a drug discovery program to create affordable precision medicine for diffuse intrinsic pontine glioma (DIPG). This project is groundbreaking in two ways: it seeks to develop a new medicine specifically for children’s cancer and it pioneers “open science” not only to accelerate medicinal discovery, but also to validate open science as a viable corporate model that will allow M4K to lower discovery and development costs and enable more affordable pricing of the marketed medicine.

Glioblastoma multiforme (GBM) is a devastating form of brain cancer. There is a need to devise new, innovative therapies for this type of cancer. A relatively new approach is to manipulate the immune system within the brain to inhibit tumour growth. We will achieve this goal using computer-aided drug design. We have targeted a protein that regulates the immune system in the brain. By developing detailed three-dimensional maps of this protein, we are designing drugs to bind to this receptor and to function as new therapies for the treatment of GBM.

Cancer Therapeutics Innovation Pipeline Christine Williams Cynthia Hawkins Drug Discovery FACIT Hamilton M4k Pharma McMaster University News release Reza Moridi SickKids Structural Genomics Consortium Therapeutic Innovation University Health Network University of Toronto
Looking Ahead
Receive the latest news, event invites, funding opportunities and more from the Ontario Institute for Cancer Research.
Subscribe
Subscribe
This website uses cookies in order to optimize the user’s experience. To learn more about how we use cookies on this website, please review our Website Privacy Statement. Your browser settings may allow you to turn off cookies. By continuing to use our website site without changing your browser settings, you consent to our use of cookies in accordance with Website Privacy Statement
Cookie SettingsAccept All
Manage consent