News and Media
OICR welcomes Dr. Christine Williams
This April OICR welcomed Dr. Christine Williams as Deputy Director and Vice-President, Outreach. Williams joins OICR from The Canadian Cancer Society, where she was the Chief Mission Officer, responsible for overall leadership of the organization’s activities in research, policy, advocacy, information and support programs. Prior to that she was the national Vice-President, Research at the Society where she oversaw a cancer research budget of $40 million each year. 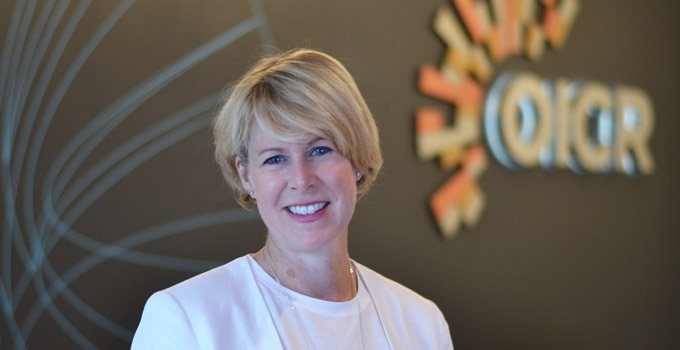 This April OICR welcomed Dr. Christine Williams as Deputy Director and Vice-President, Outreach. Williams joins OICR from The Canadian Cancer Society, where she was the Chief Mission Officer, responsible for overall leadership of the organization’s activities in research, policy, advocacy, information and support programs. Prior to that she was the national Vice-President, Research at the Society where she oversaw a cancer research budget of $40 million each year.

Williams was looking for a change, however, and one that would bring her closer to her roots as a scientist. Williams holds a PhD in Immunology from the University of Toronto and completed postdoctoral training at Massachusetts General Hospital, where she studied the molecular pathways involved in the development of leukemia and lymphoma in children.

“I wanted to get back into science and play more of a role on the research strategy side, particularly in how research impacts people,” she says. “The big picture of how what is modelled and learned in an experimental setting can change the health of people and populations is what attracted me to science in the first place.”

She was intrigued by the deep integration of science into everyday life at OICR.

“OICR is great for this, because science is so embedded within the organization, with labs literally connected to office space. There is a seamlessness between students, postdocs, Principal Investigators and management – we all own the science here.”

She was also attracted to working at OICR because of the organization’s leadership role in cancer research both provincially and internationally and because of the high calibre of OICR research and scientists. “I knew before coming to OICR that the Institute was on the forefront of cancer science, and known for anticipating where research was going, especially in precision medicine,” she says. “We are tackling big challenges here – translational science is difficult – but ultimately how new knowledge can change the trajectory of cancer.

In fact, Williams was intrigued by the idea of OICR before it was even created.

“As a postdoc, I remember Bob Phillips [then President and CEO of the Ontario Cancer Research Network, OICR’s predecessor organization] coming to Boston to give a talk about conducting clinical trials in Ontario. I met with him afterwards and he told me that there were big changes in the works that were going to revolutionize translational cancer research in the province. He was passionate and enthusiastic about it – but couldn’t reveal more. To now work at OICR 12 years after that early vision was shared with me is a huge honour.”

There is a seamlessness between students, postdocs, Principal Investigators and management – we all own the science here.

Williams replaces Dr. Nicole Onetto, who served as OICR’s Deputy Director and Chief Scientific Officer since 2009, as Deputy Director. But her role will be somewhat of a hybrid of different elements from the leadership team and add a major new portfolio. She will be overseeing the Scientific Secretariat and Research Operations that Onetto oversaw previously, tracking the distribution of funding to OICR’s researchers and reporting on the impact of those funds. She will also be representing OICR externally, acting as OICR’s representative on boards and committees and speaking on behalf on the Institute, a responsibility previously held by Dr. Tom Hudson, OICR’s President and Scientific Director.

The big new element is greater outreach to the OICR community, as outlined in OICR’s new Strategic Plan for 2016-2021. “The outreach role is an extremely important part of the new plan,” she says. “It was felt there could be stronger efforts made to connect OICR with all of its stakeholders in Ontario, from researchers to government to partners to the private sector. OICR is the second largest funder of cancer research in Canada, and the largest funder of translational research, so we have a significant leadership role both in the province, nationally and internationally.” Williams says that it important that OICR look to build relationships with all of its partners, including the research community, the clinical community, patients, governments, the private sector and the general public, all of whom are invested in benefitting from OICR’s research.

“There has been a lot of confidence exhibited by the Ontario government in this institute and what it can do for translational research,” she says, “and particularly what it can do for pushing research into the clinic while having economic and societal impacts as well. We want to make sure we are part of the fabric of all of these communities that are impacted by our work.”

Her experience working in the broader cancer research community and understanding of the landscape will be essential to this role. “Bringing some of those previous connections together will be key,” she says.

Williams is excited about the opportunities this new direction presents. “OICR’s new strategic plan is quite different from the past and in some ways we’re turning the previous plan inside out by making it more accessible to the community,” she says. “Establishing the right strategy for that and involving our partners along the way will be important to ensuring the plan is successful. Being clear about what the impact of OICR has been and its potential going forward will be key.”

She notes that OICR represents a big investment in cancer research and sees a duty to make the most possible impact from that investment. “The opportunity to be truly transformative in what OICR can do for cancer patients is huge. That is what keeps everyone here and it is also what motivates us. OICR research will change the way oncology prevention and care is delivered in Ontario and around the world.”