News and Media
OICR’s Dr. Clare Jeon discusses how the discovery of protein signatures could lead to cheaper, easier diagnostic tests for prostate cancer
Researchers at the Ontario Institute for Cancer Research, University Health Network and Eastern Virginia Medical School, in a paper published today in the journal Nature Communications, have identified protein signatures in urine that can accurately diagnose aggressive prostate cancer. The signatures could be used to develop a test for prostate cancer that uses a patient’s urine sample to determine whether he has prostate cancer and another test that could identify how aggressive the disease is. This would help to replace more invasive tests such as PSA test and biopsy, which also have high rates of over-diagnosis and in many cases lead to over-treatment. 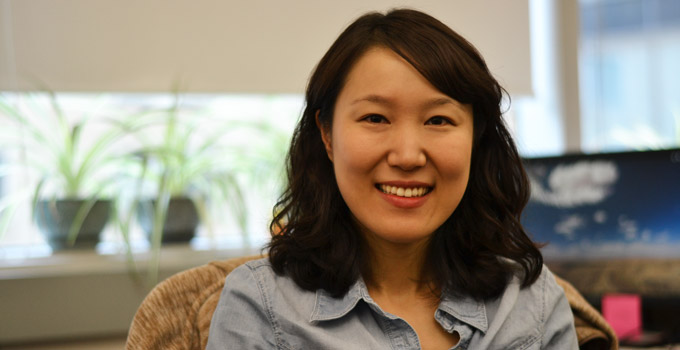 Researchers at the Ontario Institute for Cancer Research, University Health Network and Eastern Virginia Medical School, in a paper published today in the journal Nature Communications, have identified protein signatures in urine that can accurately diagnose aggressive prostate cancer. The signatures could be used to develop a test for prostate cancer that uses a patient’s urine sample to determine whether he has prostate cancer and another test that could identify how aggressive the disease is. This would help to replace more invasive tests such as PSA test and biopsy, which also have high rates of over-diagnosis and in many cases lead to over-treatment.

These signatures are now ready for a large retrospective validation study and, if validation is successful, will then move into clinical trials.

OICR played a major role in the project by performing the computational biology on the clinical and proteomic information that came from researchers at University Health Network and Eastern Virginia Medical School. Dr. Clare Jeon, a bioinformatician working in the lab of Dr. Paul Boutros in the Informatics and Bio-computing group at OICR, spoke to us about the significance of the study and the role computational biology played in its success.

Why are the findings of this study so significant?

Urine is considered an ideal fluid for this type of test since it is easy to get compared to something like a blood test or biopsy. The proteins escape the prostate and are expelled through urine due to the deteriorating structural integrity of the patient’s prostate cancer. However, only a few studies have examined protein abundance in urine samples so far. We provide the first work, as far as we know, that uses proteomic techniques for the systematic identification of novel biomarker signatures in urine that generates diagnostic and prognostic predictive models from a medium sized cohort of biofluid.

(Biomarkers are measurable substances in the body whose existence can be used to indicate whether a disease like cancer is present and to what extent).

How will these new biomarkers help patients?

What role did computational biology play in this study? How does it complement the proteomics work?

Computational biology can help to identify the most probable protein biomarkers that show significant change of expression between two clinical or pathological conditions and could be involved in cancer development and progression. Initial proteomics work in this study generated expression information from 624 proteins. Computational analyses performed here at OICR reduced the number of proteins by identifying significantly differentially expressed proteins and finally characterized a set of six protein biomarkers for diagnosis and a set of seven protein biomarkers for prognosis of prostate cancer.

What are machine learning approaches and how were they used to develop predictive models in this study?

What are the next steps for this project?

(Biochemical recurrence is the return of detectable levels of PSA in the blood after treatment and can occur even when there are no other symptoms of prostate cancer present).

How did you become involved in the study?

I joined OICR in February 2015 and took this project as my first job. During my PhD I was involved in analyzing different types of proteomic datasets and published several related papers. Since then, I have become more interested in proteomics studies and have become pretty accustomed to work in this field. Also, I have lots of experience in identifying novel biomarkers from different types of high-throughput datasets. It helps me to generate predictive models. I think I was a good fit in the lab to do this work and I feel very lucky I could lead this project.