News and Media
OICR’s Geoff Fong receives major funding to examine e-cigarettes and the impact of public health policy
Around the world it has become common to walk down the street and see a new trend – people vaping (using e-cigarettes). The widespread use of e-cigarettes has caught the attention of the scientific community. Recently, OICR Investigator Dr. Geoff Fong was awarded funding from Canadian and U.S. federal funding agencies to evaluate the impact of e-cigarettes and determine the effectiveness of policies around their use.

Around the world it has become common to walk down the street and see a new trend – people vaping (using e-cigarettes). The widespread use of e-cigarettes has caught the attention of the scientific community. Recently, OICR Investigator Dr. Geoff Fong was awarded funding from Canadian and U.S. federal funding agencies to evaluate the impact of e-cigarettes and determine the effectiveness of policies around their use. 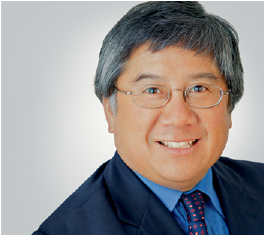 In recent years, the number of people using e-cigarettes has risen dramatically. As more people take up “vaping”, experts are grappling with whether or not the devices represent a public health threat, an opportunity, or both.

Dr. Geoffrey Fong is one of the world’s foremost experts on tobacco control policies. As leader of the International Tobacco Control Policy Evaluation Project (ITC Project), he oversees numerous studies that look at the effects of government policy on tobacco consumption. Now that the use of e-cigarettes is common, Fong and his team are using their experience in tobacco control research to gauge the impact of the technology and evaluate the effectiveness of current regulations.

“We know how harmful standard combustible cigarettes are to human health. Regular smokers increase their risk of death by 50 per cent and on average they will lose 10 years of their life from smoking,” says Fong. “E-cigarettes may provide a safer system of nicotine delivery and serve as an aid in quitting smoking, but they may also expose non-smokers to nicotine consumption, which could lead to tobacco use. Because of this, it is very important that we rigorously evaluate the public health consequences of these products.”

The importance of the work Fong and his colleagues are doing has not been lost on the research community. Recently the U.S. National Cancer Institute (NCI) and the Canadian Institutes of Health Research (CIHR) awarded Fong and his collaborators grants of $8.8 million and $11.3 million respectively. The funding from CIHR represents the organization’s largest Foundation Grant of the year out of the 120 that were awarded.

“The study of the impacts of e-cigarette usage is an emerging field. We are thankful for this funding as it will help the science catch up with the increase in the use of these devices,” says Fong. “It is such a hot topic that if the proper studies are not done, opinion will fill the void.”

The NCI grant will be used to fund a set of five interrelated projects that will look at e-cigarette policies vis-à-vis tobacco control regulations. Fong will lead one of the projects, which is a continuation of the ITC Project Four Country Survey that looks at Australia, Canada, the U.K. and U.S. This study should provide interesting results about the effectiveness of e-cigarette policies as regulations in Australia and Canada are much more stringent than those in the U.K. and U.S.

Fong and his team will use the funding from CIHR to continue to expand the global work of the ITC Project. The ITC Project investigators plan on conducting the first-ever international cohort study of e-cigarettes to answer critical questions about their impact on tobacco use. Fong says that this study will pay particular attention to countries with high rates of tobacco use such as China, where 53 per cent of men smoke.

“Understanding the pros and cons of e-cigarette use and evaluating government regulation will allow countries to put effective policies into place to promote and protect public health,” says Fong. “The work that will be done using these two grants will be a big step forward.”

Dr. Geoffrey Fong is the recipient of a Senior Investigator Award from the Ontario Institute for Cancer Research and a Professor of Psychology at the University of Waterloo.