News and Media
Old drug, new trick: study finds common diabetes drug could help fight leukemia
Researchers have discovered a new potential treatment for acute myeloid leukemia (AML). They found that boosting fat cells (adipocytes) within bone marrow with the use of a common diabetes drug slowed the growth of cancerous cells and promoted the regeneration of healthy blood cells. 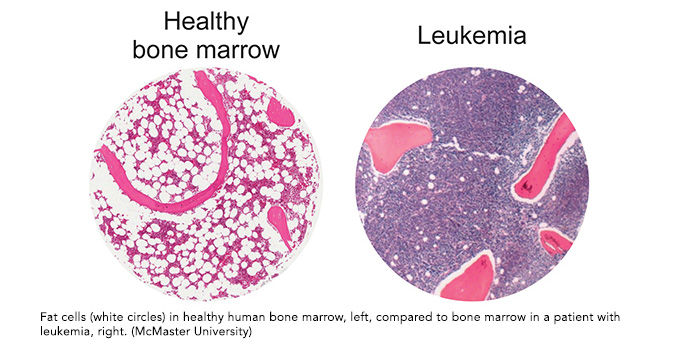 Researchers have discovered a new potential treatment for acute myeloid leukemia (AML). They found that boosting fat cells (adipocytes) within bone marrow with the use of a common diabetes drug slowed the growth of cancerous cells and promoted the regeneration of healthy blood cells.

The study, led by Dr. Mick Bhatia at the McMaster Stem Cell and Cancer Research Institute (SCC-RI) took a different approach than much of the previous research into AML. “Our strategy represents a different way of looking at leukemia and considers the entire bone marrow as an ecosystem, rather than the traditional model of studying and trying to directly kill the diseased cells themselves,” says Allison Boyd, Postdoctoral Fellow at SCC-RI and first author of the study.

In patients with AML, a lack of healthy red blood cells often leads to anemia and infection – two of the most common reasons for hospitalization and death of patients with the disease.

The research, which was recently published in Nature Cell Biology, was conducted over a period of three and a half years and used a large cohort of bone marrow samples donated by patients in Ottawa, London and Hamilton. Detailed analysis of the samples found that when they were exposed to a drug commonly used to manage diabetes, production of fat cells increased, in turn boosting red blood cell production and suppressing leukemic cells within the bone marrow.

Bhatia and his team at SCC-RI are part of OICR’s Acute Leukemia Translational Research Initiative (TRI), a province-wide effort that is bringing top researchers and clinicians together to better understand the disease and find new treatments. Funding from OICR will support research that builds upon these significant findings.

“We will now work to define the mechanisms by which adipocytes suppress AML and activate healthy cell production, as well as identifying new compounds and drugs that can better increase fat cell production in the bone marrow alone and move towards patient testing,” says Bhatia.

The fact that the drug used in their study is already in clinical use for diabetes could help accelerate efforts to see it commonly used for AML. Side effects from the drug were found to be minimal as it can be delivered in a lower dose and over a shorter time than it is typically used for diabetes.