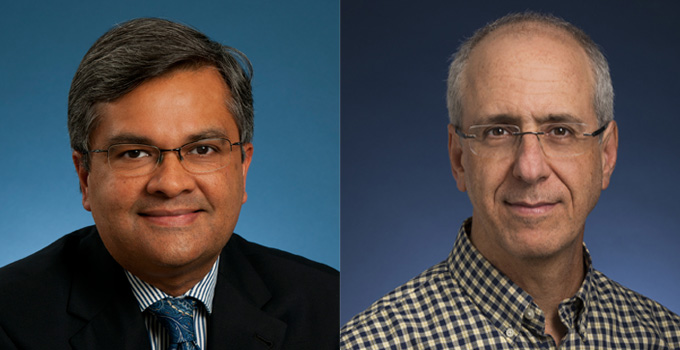 Given the advancements in treating many other types of cancer, it may come as a surprise that outcomes for patients with the most deadly form of ovarian cancer have not improved in 50 years. This form, known as High Grade Serous Ovarian Cancer (HGSOC), accounts for 80 per cent of ovarian cancer deaths in Canada. Surgery and chemotherapy can be effective, but ultimately three-quarters of women with HGSOC will see their disease return. To deliver better outcomes for patients, OICR has launched a new ‘all star team’ of ovarian cancer researchers.

The Ovarian Cancer Translational Research Initiative (TRI) is a collaboration of Ontario scientists and clinicians who are working to understand how HGSOC develops resistance to chemotherapy and to develop new treatments. At the centre of the work is the knowledge that ovarian cancer is a genomically unstable disease due to its highly damaged and mutated genome. This aligns with a relatively new paradigm in cancer research called adaptive oncology in which treatments are designed to the specifics of a cancer at different points in its evolution and treatment.

In May, OICR announced $24 million in new funding for translational research, which included the establishment of four new Translational Research Initiatives (TRIs). These interdisciplinary teams are tackling the challenges in diagnosing and treating some of the most deadly forms of cancer by bringing together some of Ontario’s top researchers and clinicians.

“Ovarian cancer cells are different from normal cells because they grow when they shouldn’t grow, they move around in the body – they migrate, they have different metabolism and they’re resistant to chemotherapy drugs,” says Dr. Robert Rottapel, scientific leader of the TRI and Senior Scientist and Amgen Chair for Cancer Research, Princess Margaret Cancer Centre (PM). “They also have new emergent vulnerabilities that distinguish them from normal cells and these vulnerabilities can actually be exploited therapeutically.”

The TRI team is studying how the cancer’s cells adapt to biological stress and develop resistance to chemotherapy. Identifying the biological pathways responsible will ultimately allow for new treatments to help patients whose cancer has returned.

Central to the TRI is a clinical trial called BioDIVA. BioDIVA will facilitate the collection of tumour tissue and blood samples to aid researchers in discovering and validating new biomarkers for HSCOG. By collecting samples at diagnosis, during treatment, recurrence and disease progression, the trial will allow scientists to understand how HSCOG changes overtime and adapts to become resistant to chemotherapy.

“BioDIVA is a really innovative study, which will take patients at initial diagnosis as well as following recurrence. It will study, in-depth, their genomic and immune profile to really understand the disease and try and make meaningful conclusions about the patient’s disease, the biology and the potential for sensitivity or resistance based on that information,” says Dr. Amit Oza, the TRI’s clinical leader and a Senior Staff Physician at PM. “Then we can link that back to treatment – either standard of care or for patients in clinical trials.

He says that’s what really excites him about this program. “We truly have the ability, in a relatively short timespan, to make some major advances both in terms of treatment of ovarian cancer as well in trying to understand what constitutes disease resistance and trying to overcome those mechanisms.”

Rottapel echoes Oza’s enthusiasm for the promise of the TRI’s unique approach. “All cancer is complex and in order to make progress we have to really bring together people who have very distinct but complementary expertise. There is no one person who has all of this expertise, so it relies on an ensemble of scientists working closely together,” he says. “I am really excited to be part of this larger team effort. I have confidence we are going to have a big impact on ovarian cancer provincially, nationally and worldwide.”