News and Media
Patients need access to more stem cells for transplants. Researchers have now identified the genetic switch that could turn on the supply
Researchers at the Princess Margaret Cancer Centre, funded in part by OICR, have found a genetic switch that could be used to develop many more stem cells from the blood found in umbilical cords, a resource that is highly valuable for stem cell transplants but still in short supply. 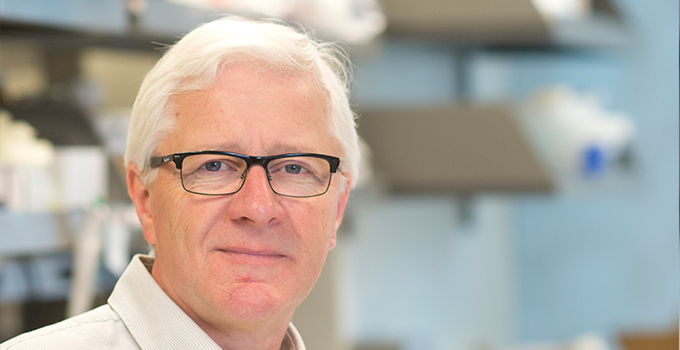 Researchers at the Princess Margaret Cancer Centre, funded in part by OICR, have found a genetic switch that could be used to develop many more stem cells from the blood found in umbilical cords, a resource that is highly valuable for stem cell transplants but still in short supply.

Dr. John Dick, a Senior Scientist at the Princess Margaret Cancer Centre and the Program Director of OICR’s Cancer Stem Cell Program, working with Dr. Gerald de Haan in the Netherlands, has found an intriguing new way to increase the supply of blood stem cells from the umbilical cord. This could provide new options for patients requiring stem cell transplants, including patients who have been treated for leukemia. The research was published this month in the journal Cell Stem Cell.

Umbilical cords provide essential nutrients and oxygen to the growing fetus in the womb, but are usually discarded shortly after birth. The case for preserving the cord’s blood, however, has been growing over the past few decades.

Umbilical cord blood contains a rich supply of potentially life saving undifferentiated stem cells that can be used to help cancer (and other) patients in need of stem cell transplantation after therapy. These stem cells can be used for multiple treatments, such as replacing the depleted bone marrow in patients undergoing treatment for leukemia. Recently, awareness of the value of cord blood has risen and public cord blood banks have been established to bank this blood and help match the stem cells to patients.

Stem cells derived from cord blood have many advantages over those from bone marrow, which is the current standard source for stem cells for these transplants. Cord blood stem cells are easier and safer to collect, don’t require the same exacting degree of match between donor and patient and patients are safer after treatment, with a lower rate of infection.

The problem, however, is that there are simply not enough stem cells in a cord blood sample and often not enough for successful stem cell transplant. While there are an estimated 40,000 transplants made worldwide each year, approximately 67 per cent of patients who require the procedure can’t have it because of a lack of matched donors. That means only about one third of patients who require therapy get it.

While there is a lot of research underway in the field, Dick and de Haan chose to take a different approach to the problem. Stem cells differ from normal cells in that they can change from one cell type to another and can divide to produce many more stem cells. When a stem cell divides, however, it makes a lot of cells called progenitor cells downstream that retain key properties of the stem cell but have lost the ability to self-renew.

The team identified miR-125a, a small, non-coding RNA, as a genetic “switch” that is normally on in stem cells but off in the downstream progenitor cells.

“Our work shows that if we artificially throw the switch on in those downstream cells, we can endow them with stemness and they basically become stem cells and can be maintained over the long term,” said Dick.

While the work is still in an early phase, the potential is huge. If Dick and his team can turn the switch on these cells on a regular basis, it would provide a way to keep stem cells from cord blood self renewing, and provide many more cells for the two thirds of patients who are currently unable to access treatment.

“Our discovery shows a method that could be harnessed over the long term into a clinical therapy and we could take advantage of cord blood being collected in various public banks that are now growing across the country,” he added.

Plans are already in place to move this early stage research closer to the clinic.

“Since these data are only proof-of-principle experiments it will take some time to translate these findings into a therapy for patients,” said Dick. “To accomplish this, we will need to either identify drugs that can activate the endogenous expression of miR-125a in multipotent progenitor cells or discover efficient non-toxic methods for the delivery of chemically synthesized miR-125a to these cells.”

Dick’s discovery is one in a long line of world firsts in Ontario stem cell research, including the actual discovery of stem cells by Drs. Till and McCulloch at the Princess Margaret in 1961 and Dick’s own discovery of cancer stem cells in certain types of leukemia in 1994.