News and Media
Researchers discover genes behind the spread of lung cancer to the brain
Brain tumours resulting from the spread of cancer from its primary location, known as brain metastases (BM), are the most common form of brain tumours in adults. A team of Ontario-based researchers recently identified two genes that seem to play a central role in BM in lung cancer patients – findings that could lead to improved biomarkers and treatments for BM. 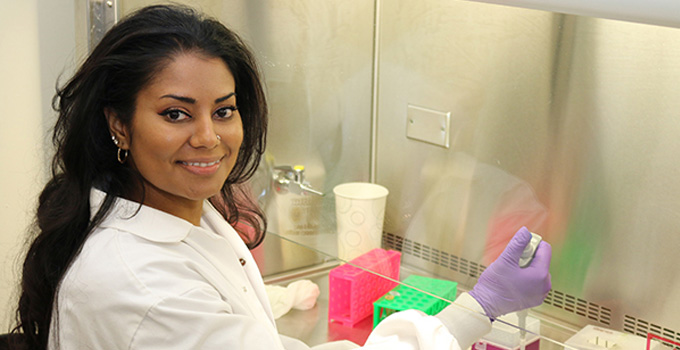 Brain tumours resulting from the spread of cancer from its primary location, known as brain metastases (BM), are the most common form of brain tumours in adults. A team of Ontario-based researchers recently identified two genes that seem to play a central role in BM in lung cancer patients – findings that could lead to improved biomarkers and treatments for BM.

In a study published in the journal Acta Neuropatologica, Mohini Singh and her collaborators focused on a class of cells they have termed Brain Metastases Initiating Cells (BMICs), which leave the primary site of cancer and migrate to the brain.

Singh, a biochemistry PhD candidate in the lab of Dr. Sheila Singh at McMaster University, explains the approach the team took to study these cells. “There was a lack of preclinical models that we could use to comprehensively study BMICs and understand the mechanisms behind them. To conduct our study we used brain metastases from lung cancer patients, which we cultured in conditions to enrich for BMICs, and then transplanted them into mice. This method allowed us to study BMICs within a living host, which provides a more accurate representation of the development of brain metastasis in humans.”

The researchers performed in vitro and in vivo RNA interference screens utilizing their unique BM models, and found two genes that were essential to the regulation of BMICs: SPOCK1 and TWIST2. “We discovered that SPOCK1 is a regulator of self-renewal in BMICs, playing a role in the initiation of lung tumours and their metastasis to the brain,” explains Singh. Furthermore, the results were clinically relevant. “Increased SPOCK1 expression was seen in lung cancer biopsies of patients with known brain metastases, and was correlated with poor survival.” Through protein-protein interaction mapping the researchers also identified new pathway interactors of the two genes that could be used as novel targets in treatment of BM in lung cancer patients.

“Identifying these two genes could be of great use in improving the treatment of lung cancer. In the future we could predict those patients who are most at risk of developing a brain metastasis and use drugs to target BMIC regulatory genes such as SPOCK1 and TWIST2 to destroy the initiating cells and to block the spread,” says Singh. “This would result in keeping the lung cancer locally controlled and therefore more treatable.”

OICR funding was used to establish this study with further significant funding coming from the Canadian Cancer Society and the Brain Canada Studentship.