News and Media
Researchers find a new way to address the challenge of brain tumour “stiffness”
Brain tumour tissue is often stiffer than normal tissue. New research funded by OICR helps to explain how this occurs – and how this knowledge can be used to help slow tumour development. 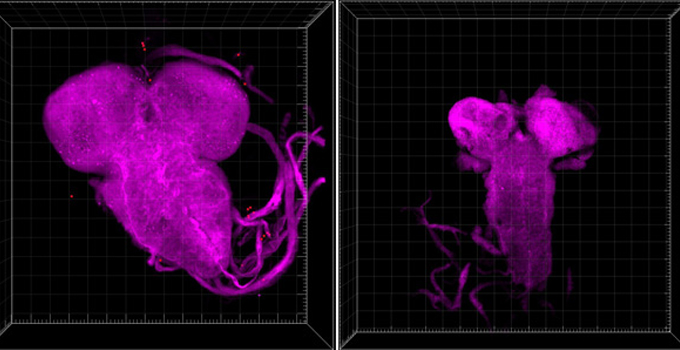 Brain tumour tissue is often stiffer than normal tissue. New research funded by OICR helps to explain how this occurs – and how this knowledge can be used to help slow tumour development.

Uncontrolled cell growth in solid tumours, such as brain tumours, causes tumour tissue to be stiffer than healthy tissue, creating an advantageous environment for tumour cells to proliferate rapidly, avoid cell death and develop resistance to drugs. But how tumour tissue stiffens is not well understood. A research group based at the The Hospital for Sick Children (SickKids) recently discovered how tumour cells sense and respond to tissue rigidity. Their findings, recently published in Neuron, show that stopping the mechanism that drives tumour stiffness could slow cancer growth.

“We discovered the mechanism that senses and amplifies tumour stiffness in brain cancer,” says Dr. Xi Huang, Scientist in the Developmental and Stem Cell Biology program at SickKids, Assistant Professor in the Department of Molecular Genetics at the University of Toronto, and lead of this study. “In doing so, we’ve found a promising way to suppress tumour hardening and potentially slow or stop the progression of the disease.”

The research team found that a specific cell-surface ion channel, PIEZO1, regulates cell proliferation and tissue stiffening in glioma – the most common type of brain cancer. In healthy cells, PIEZO1 acts as a valve on the cell’s surface that opens and closes to regulate normal tissue function such as blood flow. In tumours, however, the study found that PIEZO1 detects the pressure caused by tissue stiffening and opens in response to the pressure, causing further cancer cell proliferation and tumour growth.

“We discovered that PIEZO1 function is hijacked in tumours,” says Huang. “In the altered mechanical tissue environment of glioma, it promotes further stiffening of the tumour and fuels malignant growth.”

The study proposes that if the function of PIEZO1 in brain tumours could be controlled, then in turn, tumour stiffening and aggression could be controlled. Using these new findings, Huang and Brain Cancer TRI collaborators will work to develop new treatments that slow or stop tumour stiffening and restore normal physical characteristics of the brain.

“This is exactly what the brain tumour field needs,” says Dr. Peter Dirks, Co-Leader of OICR’s Brain Cancer TRI, Staff Neurosurgeon and Senior Scientist in the Developmental and Stem Cell Biology program at SickKids and a co-author of this publication, “This discovery opens doors to completely new ways of thinking about how to treat these aggressive tumours.”