News and Media
Researchers find early indicators of leukemia in genomes up to 10 years before symptoms surfaced
Acute myeloid leukemia (AML) progresses quickly and requires treatment soon after diagnosis, but the disease begins long before becoming symptomatic. Early indicators of AML were thought to be indistinguishable from healthy aging. But now, an international group of researchers led in part by Dr. Sagi Abelson, a postdoctoral fellow in the lab of Dr. John Dick at the Princess Margaret Cancer Centre, has discovered distinctive traces of AML in patients up to 10 years before they were diagnosed with the disease. 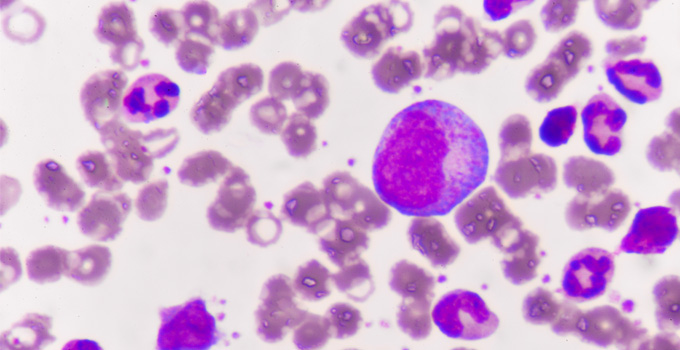 Acute myeloid leukemia (AML) progresses quickly and requires treatment soon after diagnosis, but the disease begins long before becoming symptomatic. Early indicators of AML were thought to be indistinguishable from healthy aging. But now, an international group of researchers led in part by Dr. Sagi Abelson, a postdoctoral fellow in the lab of Dr. John Dick at the Princess Margaret Cancer Centre, has discovered distinctive traces of AML in patients up to 10 years before they were diagnosed with the disease.

In this study, which was recently published in Nature, the research group sequenced and mined hundreds of patient genomes looking for pre-AML signatures, which are early indicators of AML. One of the key challenges of this exploration was reducing the error rate in their sequencing data – correcting for the sequencing errors that can be misidentified as disease-causing mutations. To accurately identify the rare mutations that drive AML, the group had to find a way to filter through the inherent errors produced by their standard sequencing platform.

To address this challenge, they teamed up with OICR’s Genome Technologies and Informatics groups through the Canadian Data Integration Centre (CDIC). Together, over the past two years, they designed and developed new tools and methods to confidently identify small traces of the disease within patient samples. They found pre-AML signatures in samples dating back, on average, 6.3 years before the patients were diagnosed. These findings show it is possible to detect individuals at high risk of developing AML – patients who could potentially benefit from early interventions.

“The approach that we took required all hands on deck and CDIC was instrumental in bringing contributors together from different backgrounds – in both data generation and informatics,” says Dr. Philip Awadalla, Director of Computational Biology and Senior Investigator at OICR and Director of CDIC.

The team designed methods that suppress error rates and “clean” the sequencing data by using an approach called molecular barcoding. This approach uses unique molecular identifiers (UMIs) to tag each piece of sequenced DNA and compare repeated sequences that are known to originate from the same strand of DNA. In doing so, the researchers can decipher between variations that are real biological mutations and those that are sequencing errors. Error reduction by both molecular barcoding and computational approaches enabled them to identify small traces of pre-AML signatures with higher sensitivity, better accuracy and more confidence.

“With these tools, we were able to make firmer judgements on what is and what isn’t a real trace of AML,” says Abelson. “We were able to push the limitations of our standard sequencing platforms to find something truly remarkable – indicators of a disease that can help identify patients years before AML becomes aggressive.”

This research was directed by an international team of leaders in stem cell biology from Israel (Dr. Liran Shlush), the United Kingdom (Drs. Moritz Gerstung and George Vassiliou), France (Dr. Paul Brennan) and Canada (Dr. John Dick), and funded in part by OICR’s Acute Leukemia Translational Research Initiative, which is led in part by Dick.

OICR’s Genome Technologies and Informatics groups were involved with this study from initial study design through completion. Their contributions were supported by the CDIC. As part of the research team, CDIC offered bioinformatics support by providing the customized software and analytic systems needed to collect, harmonize, clean and analyze the data.  Learn more about CDIC’s platform, Canada’s one-stop shop for genomics research.