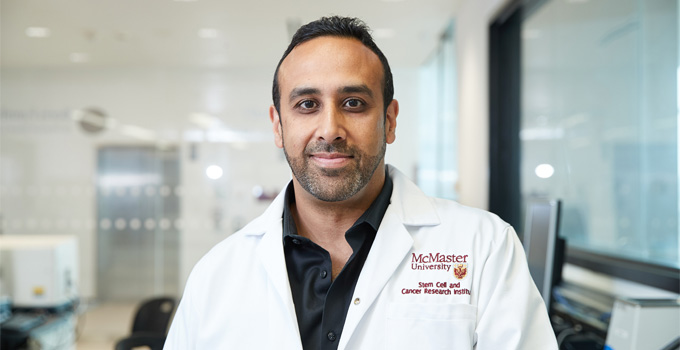 Although current chemotherapy for acute myeloid leukemia (AML) is effective in the short term, the disease often returns a few years after treatment. A new study suggests that the relapse of leukemia may not be caused by leukemic stem cells – a special set of cells that can avoid initial treatment by not dividing, then give rise to new cancerous cells after therapy – but rather a different class of leukemic cells.

The research group, based at the McMaster Stem Cell and Cancer Research Institute (SCC-RI), recently described a new potential basis of leukemia relapse that comes from previously-uncharacterized cells, which they’ve termed leukemic-regenerating cells (LRCs). Their findings, recently published in Cancer Cell, mark the beginning of what could be a paradigm shift in cancer stem cell research.

“We simply challenged the common assumption that leukemic stem cells are invincible to chemotherapy,” says Dr. Mick Bhatia, Director of the SCC-RI and lead of this project. “We found that this wasn’t the case and what remained were cancerous cells with a different set of properties. “It is a challenge to study how leukemia regenerates after treatment because the rare cancerous cells that remain are difficult to distinguish from normal healthy cells. Bhatia’s team recreated the process of chemotherapy in an experimental model that  established human leukemic disease in immune-deficient mice. This allowed them to locate the rare human leukemic cells that survived through treatment, distinguish them from the mouse cells, and characterize the regeneration process at this critical time point.

Their research demonstrates that chemotherapy effectively destroys leukemic stem cells and the remaining cancerous cells have unique features that arise in response to treatment. They found that these LRCs have a different gene signature than both leukemic stem cells and normal healthy stem cells – making them detectable in animal models and in human AML patients. Their unique features could be used to predict relapse before it becomes aggressive and increasingly difficult to manage.

“We were able to find distinct indicators of leukemic-regenerating cells that allowed us to specifically target these cells amidst a complex environment of the bone marrow where they reside,” says Bhatia.

In their publication, the research team describes key cellular pathways in leukemic-regenerating cells that could have therapeutic potential. They found that these cells behave very differently after undergoing transitions throughout chemotherapy, which Bhatia’s lab will continue to exploit in hopes of developing novel therapeutic strategies for the disease with better long-term outcomes and relapse prevention.

“Our findings strongly encourage us to revisit the notion that cancer stem cells, as previously described, are the basis of returning AML,” says Bhatia. “With this information, we hope to find new ways to treat the disease and prevent relapse altogether.”

The study was supported in part by OICR’s Acute Leukemia Translational Research Initiative,  which is led by Drs. John Dick and Aaron Schimmer at the Princess Margaret Cancer Centre. “A major effort in the Leukemia TRI program is to understand why some leukemia cells respond to therapy and are eradicated, while others both survive and regenerate the disease to cause relapse. The Bhatia paper adds another line of insight into potential mechanisms that contribute to the relapse process,” says Dick.