News and Media
Study highlights effectiveness of worldwide tobacco control treaty
According to the World Health Organization (WHO), tobacco is used by over 1 billion people and is the number one preventable cause of death and disease. Tobacco—especially smoked tobacco—causes 30 per cent of the world’s cancer cases and so tobacco control is the number one strategy for preventing cancer. Tobacco use kills six million people a year. It also brings a staggering economic cost of US$1 trillion a year in health care expenditures and lost productivity. 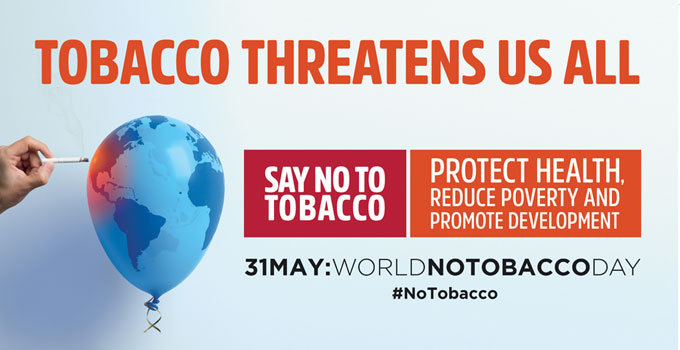 According to the World Health Organization (WHO), tobacco is used by over 1 billion people and is the number one preventable cause of death and disease. Tobacco—especially smoked tobacco—causes 30 per cent of the world’s cancer cases and so tobacco control is the number one strategy for preventing cancer. Tobacco use kills six million people a year. It also brings a staggering economic cost of US$1 trillion a year in health care expenditures and lost productivity.

The WHO Framework Convention of Tobacco Control (FCTC) is a treaty that was created to combat the global tobacco epidemic. Currently, 179 countries and the European Union have joined the treaty, which obligates countries covering about 90 per cent of the world’s population to implement a set of strong evidence-based measures to reduce tobacco use. The FCTC is, in effect, the most extensive cancer prevention effort in history. The FCTC recently marked ten years since its coming into force. But how much impact have these measures made? A research team centered at the International Tobacco Control Policy Evaluation Project (the ITC Project), University of Waterloo (UW), recently published a study that demonstrated the positive impact of the FCTC on smoking rates.

Dr. Shannon Gravely, Research Assistant Professor at UW, was the lead author on the study, which was published in Lancet Public Health in March. The study examined how the implementation of five key FCTC tobacco policies affected smoking prevalence across 126 countries. “We looked at the highest-level implementation (i.e. fully satisfying the requirements of the FCTC) of these measures between 2007-2014 and the smoking prevalence estimates for the first 10 years of the FCTC, from 2005 to 2015,” says Gravely. “We found a strong and statistically significant association between the number of these FCTC measures and decreases in smoking rates.”

The five tobacco demand-reduction measures studied by the ITC Project team were: 1) Taxation; 2) Smoke-free policies; 3) Warning labels; 4) Bans on advertising, promotion and sponsorship; and 5) Cessation programs. The researchers found that with each additional measure implemented at its highest level, countries experienced an average decline in smoking prevalence of 1.57 percentage points, or a relative decrease of 7.09 per cent.

“It is indeed good news that the FCTC measures are associated with decreasing the number of smokers, but the bad news is that few countries are actually implementing these effective measures,” says Gravely. Only a fifth of the countries covered in the study had implemented taxes on tobacco at the highest levels called for under the treaty. “We found this to be particularly worrisome as it is known that increasing the price of tobacco via taxes is the most effective way to reduce tobacco use,” says Gravely. In fact, none of the five key FCTC policies had been implemented by even half of the countries.

“Overall, the study found that these measures, when implemented at their highest levels are very effective at reducing smoking rates,” comments Gravely. “Our findings highlight the importance of tobacco control measures in improving global health by directly decreasing the rates of smoking thus in turn indirectly reducing tobacco-attributed-non-communicable diseases.”

Dr. Geoffrey Fong, Professor of Psychology and Public Health and Health Systems at UW and OICR Senior Investigator, is Chief Principal Investigator of the ITC Project. Fong, a co-author of the article, commented, “This study should be a call to arms for governments to strengthen and accelerate their efforts to fully implement the FCTC secure in knowing that such efforts will significantly reduce the devastation caused by tobacco products in their countries.”