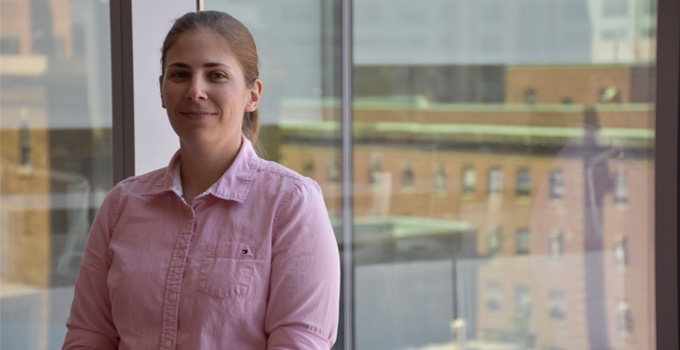 Researchers further clarify the role of epigenetic proteins in the development of breast cancer, and discover that inhibiting these proteins could prevent the disease in women at high risk.

Women at high genetic risk for breast cancer know they may develop the disease but their options to prevent it are limited. Researchers at the Princess Margaret Cancer Centre, led by Drs. Rama Khokha and Thomas Kislinger, have teamed up with OICR researchers to investigate how to stop breast cancer from developing in these women, in order to prevent the disease and improve quality of life. The research team has uncovered a new way to block the cells that underlie breast cancer development – mammary progenitor cells – by targeting certain proteins that regulate their growth, called epigenetic proteins.

Their research, which was recently published in the Journal of Cell Biology (JCB), investigated the complex mechanisms that govern mammary progenitor cell growth. Julie Livingstone, a bioinformatician at OICR and one of the authors of the publication, was a key contributor to the data analysis behind this research. She helped navigate the dense epigenetic, transcriptomic and proteomic data to uncover that epigenetic proteins help drive progenitor cell development.

“We wanted to find out how some progenitor cells grow and divide and others don’t, despite having the same genetic makeup,” says Livingstone. “We singled out epigenetic proteins as a key mechanism of genetic regulation and found that they play an essential role in progenitor cell development.”

Epigenetic proteins are compounds that can help control gene expression – how genetic instructions are carried out in the cell. The study uncovered that epigenetic proteins can act as switches that trigger the growth and development of mammary progenitor cells.

Dr. Alison Casey, Postdoctoral Fellow in the Khokha Lab and primary author of the study, then led the experimental work, which investigated how to stop epigenetic proteins from supporting cancer development. The research team found that certain drugs can delay breast tumour development in genetically engineered mice and block progenitor cell growth in both mouse and human samples.

The mechanisms that were identified could potentially be used to prevent certain breast cancers in individuals with high genetic risk. The study describes these mechanisms as new “promising strategies for breast cancer chemoprevention,” which Khokha’s Lab will continue to exploit.

“If we had only looked at one aspect of regulation, we would only understand part of the picture,” says Livingstone. “But when we looked at many cellular mechanisms in concert, that’s where we identified the intricate – but promising – vulnerabilities of the disease.”

The research team would like to acknowledge all authors of the JCB publication, including Ankit Sinha, PhD Candidate in the Kislinger Lab, for his contributions to this research.