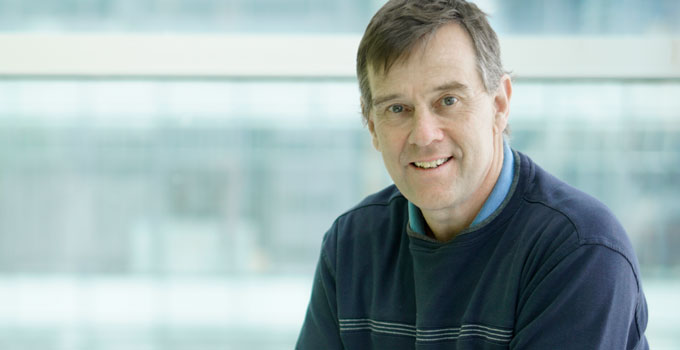 Diffuse intrinsic pontine glioma (DIPG) is a lethal and inoperable brain cancer with a median survival of less than a year from diagnosis. Finding solutions to this disease is challenging due to its rarity, scientific complexity and its presentation in pediatric populations. An OICR-funded team of researchers, led by Dr. Aled Edwards from M4K Pharma, have developed new potential drug candidates for DIPG that they will test in animal models in the coming months. They’ve reached this milestone ahead of schedule, with fewer resources required than anticipated, by using an ‘open drug discovery’ approach – sharing their methods and data with the greater research community to streamline the drug discovery process.

“Sharing our scientific progress and results has helped us collectively work towards a solution for DIPG patients in a unique way,” says Edwards. “Our open model has allowed us to learn from the experiences of other public and private sector research groups who actively share their unpublished methods and data.”

M4K Pharma, the world’s first open drug discovery company, has now partnered with international research groups to develop a new drug for DIPG. They’ve found a set of ALK2 inhibitors – molecules that target a key protein in DIPG development – which they are currently optimizing in preparation for in vivo studies – the next significant step in the drug development process.

Sharing our scientific progress and results has helped us collectively work towards a solution for DIPG patients in a unique way – Dr. Aled Edwards

“What’s really remarkable about this project is how our open scientific update meetings have attracted new collaborators, funders and partners with whom we’ve made significant progress,” says Owen Roberts, the CEO of M4K. “Some of these groups, many of whom we did not even know before, have called to volunteer their services towards this initiative.”

OICR is both a scientific partner and catalytic funder of this project, offering in-house medicinal chemistry services that are driving the project through lead optimization. With OICR’s seed funding, which was awarded just over six months ago, M4K Pharma has leveraged more than $2 million in additional funding to help bring their ideas to the clinic.

“Getting a new drug to the market costs hundreds of millions – if not billions – of dollars, but our open model is challenging that norm at the research and development stage,” says Edwards. “Our funding support can – and is – taking us farther than we expected along the drug development pipeline towards an affordable medicine for children with DIPG.”

Edwards’ project is one of the 10 drug discovery projects in OICR’s Cancer Therapeutics Innovation Pipeline (CTIP) which supports the translation of Ontario discoveries into therapeutic assets with the potential for improving the lives of cancer patients. OICR is currently welcoming new interested applicants to submit their letters of intent by August 13, 2018. For more information, please visit https://oicr.on.ca/funding-opportunities/.