News and Media
Strict e-cigarette policies are meant to keep non-smokers from smoking. But they may also be preventing many smokers from quitting
Regulatory strategies on electronic cigarettes vary from country to country. The International Tobacco Control Policy Evaluation Project, led by Dr. Geoffrey Fong, explored how different regulatory environments might influence the effectiveness of e-cigarettes for smoking cessation. This research could be used to help shape e-cigarette control policies that minimize the potential health risks and recognize the potential benefits of e-cigarettes as a smoking cessation aid. 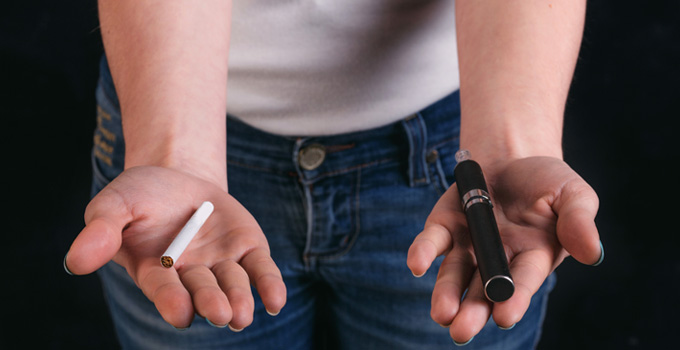 Regulatory strategies on electronic cigarettes vary from country to country. The International Tobacco Control Policy Evaluation Project, led by Dr. Geoffrey Fong, explored how different regulatory environments might influence the effectiveness of e-cigarettes for smoking cessation. This research could be used to help shape e-cigarette control policies that minimize the potential health risks and recognize the potential benefits of e-cigarettes as a smoking cessation aid.

Tobacco is the number one preventable cause of death and disease in Ontario, in Canada and throughout the world. Reducing smoking rates can lead to substantial reductions in cancer at the population level. Individual countries have different regulatory strategies for tobacco control, which can affect the behavior of smokers and the likelihood that they will want to quit smoking.

One of the complex considerations incorporated within tobacco product regulations is the access to tools that can help people quit smoking, which can include electronic cigarettes. Electronic cigarettes, or e-cigarettes, are handheld electronic devices that mimic the feeling of smoking cigarettes by generating vapour, which the user inhales. E-cigarettes have become increasingly popular, the research on the risks and potential benefits of these products is struggling to keep pace with their explosive growth.

“Although e-cigarettes are not harmless, there is clear evidence that they are less harmful overall than cigarettes,” says Dr. Geoffrey Fong, OICR Senior Investigator and Professor of Psychology and Public Health at the University of Waterloo. “If a smoker switches entirely to e-cigarettes, they will be getting their nicotine in a way that is much less harmful, with benefits to the smoker’s health and reduced healthcare costs. But if the smoker only partially switches—that is, if they become a dual user—the benefits will be considerably lower or might be eliminated altogether.”

Fong founded the International Tobacco Control Policy Evaluation Project (ITC Project) 15 years ago. The ITC Project is studying the impact of tobacco control policies and regulations in Canada and in 28 other countries, covering more than half of the world’s population and more than two-thirds of the world’s tobacco users.

Over the past five years, the ITC Project has turned its attention to e-cigarettes and the effects of e-cigarette regulations. In one ITC study, published earlier this year in Nicotine & Tobacco Research, ITC researchers examined the impact of e-cigarette regulations on the effectiveness of e-cigarettes as a method to quit smoking. They analyzed data from over five years (2010-2014) in four high-income countries. Two of the countries—the United States and the United Kingdom—had less restrictive policies on the use, marketing and distribution of e-cigarettes. The other two countries—Canada and Australia—had more restrictive policies. For example, both Canada and Australia currently prohibit e-cigarettes containing nicotine.

“These results suggest that we have to be appreciative of the broad range of effects of clamping down on e-cigarettes versus the possible beneficial effects of loosening the restrictions,” says Fong.

Health Canada is currently in the process of revising Canada’s Federal Tobacco Control Strategy. This revision will include legalization of e-cigarettes with nicotine, but under strong regulations. The regulations are designed to encourage smokers to use e-cigarettes to quit cigarettes while minimizing the future health risks of e-cigarettes for non-smokers, especially youth. By restricting young people’s access to the devices, fewer may begin to smoke normal cigarettes as a result of e-cigarette usage. The ITC Project will provide valuable evidence to inform the revision and will evaluate the impact of the revised strategy.

Fong comments, “The explosive growth of e-cigarettes and other alternative nicotine products is a global phenomenon. We need to understand their impact and understand how regulations on these new products affect tobacco use all over the world.”