News and Media
Prostate cancer trial aims to deliver shorter, more effective radiotherapy thanks to advanced imaging
Sophisticated imaging tools are being used together to guide high-dose radiation that provides safe and effective treatments in a shorter timeframe.

Sophisticated imaging tools are being used together to guide high-dose radiation that provides safe and effective treatments in a shorter timeframe.

For John Hodges, the math was simple. Five radiation treatments sounded better than 28.

The 74-year-old Goderich resident was diagnosed with prostate cancer earlier this year and told he wasn’t eligible for surgery because of pre-existing health conditions.

His doctors recommended radiation therapy. But that would mean driving three hours round trip from Goderich to the nearest cancer centre in London for 28 treatments over the course of several weeks.

“I don’t know if I could do 28 treatments in a row, driving back and forth. It would be awful,” Hodges said.

Then his doctors told him about an innovative clinical trial where he could safely get higher doses of radiation and would only need five treatments over two weeks.

“It made a lot of sense to me,” he says. “I asked a lot of questions, the doctors answered every one of them, and I decided to go ahead with it.”

PET scanning is a sophisticated technique where a molecule designed to seek out and bind to cancer cells is injected into the body to highlight the presence of cancer. mpMRI is a prostate-specific scan that can provide a more detailed image than a standard MRI. Together, they can pinpoint the location of the prostate and find the ‘dominant’ area with the highest concentration of cancer cells.

Localizing the prostate and the cancer within it is crucial to SBRT, which involves delivering a concentrated dose of radiation to a precise target. The highly detailed images from PSMA-PET and mpMRI add an extra level of precision to the process, eliminating the need for the large safety margins used to protect the surrounding organs from radiation.

“If we know where the cancer is within a millimeter or two then we can shrink those safety margins and safely increase the dose of radiation to that dominant area within the prostate,” says Bauman.

Techniques like PSMA-PET, mpMRI and SBRT are the latest steps in a series of improvements to radiation therapy that have been driven by advances in imaging. Ten years ago, when radiation treatment was mainly guide by CT scanning, it took up to 40 doses of radiation over several weeks to treat prostate cancer.

“These advances allow us to deliver a more effective dose in a way that is more convenient for the patient, and also more resource efficient,” Bauman says. “That’s a win-win for everyone.”

Confirming that radiation was effective is the second part of the ARGOS/CLIMBER trial. Participants will have PSMA-PET and mpMRI scans six months and two years after their treatment to assess how their cancer responded and whether it is likely to recur.

These post-treatment assessments are usually done with a prostate-specific antigen (PSA) test or by taking a biopsy of the prostate. But in both cases, it can be hard to confidently know that cancer is gone until at least a few years after treatment.

“It creates a lot of uncertainty for men during that time,” Bauman says.

Bauman and colleagues hope that the combination of PSMA-PET and mpMRI can accurately assess a patient’s response to treatment and find recurrence early, when additional treatment is most effective. By analyzing these sophisticated scans before and after treatment, they also hope they can find clues about how different types of cancers respond to radiotherapy.

“One goal of this study is to better understand how these scans evolve over time after treatment,” Bauman says. “Just by working with scans it’s quite remarkable what you start to see.”

“The CTP program supports practice-changing research in biomarkers, diagnostics and therapeutics that will advance early detection and intervention research and have a clear path to the clinic and clinical impact,” says Dr. Steven Gallinger, Lead, Clinical Translation. “Given that prostate cancer is a significant public health concern, improving primary radiotherapy particularly after the detection of early recurrence would be of tremendous value. The promise of personalizing treatment from the ARGOS/CLIMER study is exciting.”

Hodges is still months away from his six-month scan. But a few weeks after his last radiation treatment, after some gastrointestinal side effects passed, he was feeling good.

He says his five days of extensive scanning and radiation were long and tiring but he’s grateful for Dr. Bauman and his staff and he appreciates his compressed treatment schedule. Now, he’s hopeful that his treatment was successful.

“I feel like I caught the cancer in time, and now I’m putting my faith in the doctors,” Hodges says. 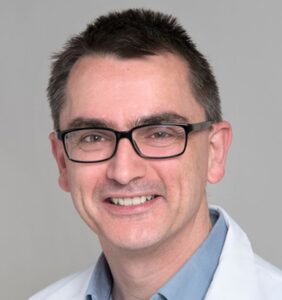 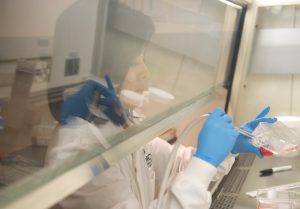